Happy Bastille Day, mes amis! Do you actually say “Happy Bastille Day” to people on Bastille Day? Is it weird that I really like to say “Bastille Day” because “Bastille” is a fun word? Pardon my ignorance, but I don’t know anything about this holiday other than what Wikipedia tells me: it’s the French National Day, which falls on July 14th and commemorates the beginning of the French Revolution. Viva la France!

I’m getting together again with my favourite bloggers to celebrate this day with, what else, good food! A huge thanks to Anita of The Hungry Couple and Susan of The Girl In The Little Red Kitchen for getting us organized today.

Even though French is one of the two national languages of Canada, I can’t speak it.

That’s pretty much the extent of my ability to converse in French. Pathetic!

I took French in high school up to grade 11 but I put zero effort into ever learning the language. The teacher I had in both grades 10 and 11 was a terrifying woman. Without warning, she would slowly drag an old, rusty stool into the centre of the room at the front of the class and would pick us at random to sit on the stool and answer a series of rapid fire questions in French. It was scary and mortifying for those of us who sputtered our way incoherently through the exercise.

Now I wish I had learned a thing or two back then. My dream destination is Paris. Someday I’ll get there and when I do, I don’t want to be ridiculed by the locals. Everyone tells me that so long as you attempt to speak French, people will be nice to you, but if you don’t, watch out. Is this true? For those of you who have been there, was that your experience?

For now, I’ll have to live vicariously through my friends (I loved this post by Erika, The Pancake Princess, chronicling her recent trip to Paris and all the incredible food she ate there), through David Lebovitz and his awesome blog (if you haven’t read his book, The Sweet Life In Paris, I highly recommend it!) and of course, by eating any French food I can get my hands on.

My last attempt at making choux pastry was a bit of a nightmare so, despite my love of cream puffs, éclairs, etc, I wasn’t going to try making anything choux based. I figured I can handle a cookie so I scoured the internet until I landed on Smitten Kitchen’s dark chocolate sables. “Sable” is the French word for sand and it’s pretty apt for these cookies because of their crumbly texture. They’re similar to shortbread and absolutely delicious. 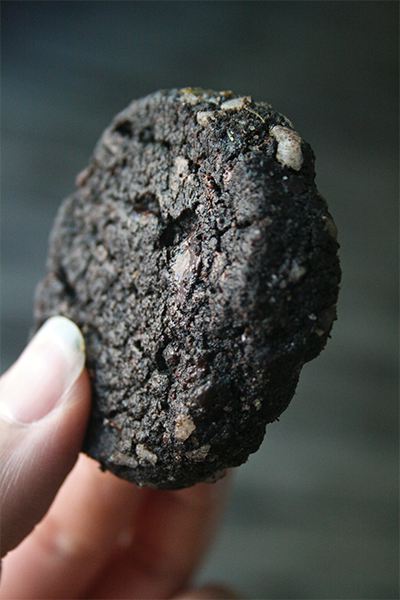 Before I get to the recipe, here are the rest of today’s offerings to entice you. Make sure you click through them all for some delightful French food inspiration! 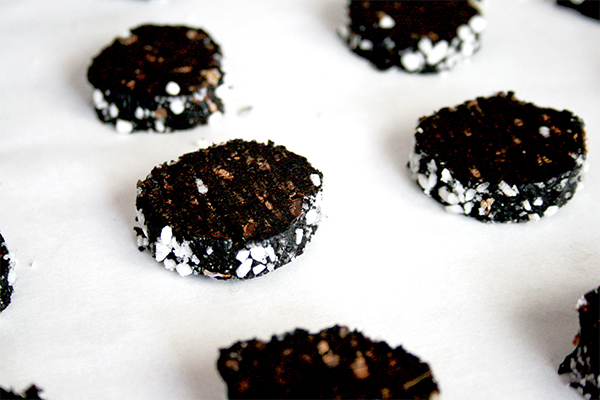 Sift together the flour, cocoa and baking soda together.

In the bowl of your stand mixer or a large bowl with an electric hand mixer, cream the butter, sugar and salt together. Add the egg yolk and vanilla, beating until combined and scrape down the sides of the bowl. To the butter mixture, add dry ingredients, grated chocolate and lavender and mix until just combined.

Scrape the dough onto a piece of plastic wrap and form it into a roll, approximately three inches wide. Wrap the roll up and chill it in the fridge until just firm, about one hour. The dough can be refrigerated until needed, up to two days, or frozen for about a month. Allow frozen dough to soften a bit before cutting.

Failing at rolling the dough in pearl sugar & sea salt. Explanation below!

Preheat the oven to 350 degrees F. Remove the dough from the fridge and unwrap. Slice into cookies approximately 1/2 inch thick. Place them at least an inch apart on a parchment-lined baking sheet. If your cookies are on the thinner side, bake between 8 to 10 minutes. If thicker, bake for 10 to 12 minutes. I baked mine for 11 minutes.

Remove from the oven and keep the cookies on the baking sheet for about five minutes before carefully removing them to a rack to completely cool.

You’ll see that there are chunks of something white on the sides of my cookie. I tried rolling the roll of dough in a mixture of pearl sugar and sea salt for that decorative look but it was rather unsuccessful (the sugar/salt didn’t adhere evenly) and it was unnecessary because the cookies tasted fantastic on their own.

The taste is dark, refined, elegant. There are teeny tiny chunks of chocolate threaded throughout each cookie that melt gloriously on the tongue. The lavender isn’t overwhelming – it provides a subtle yet ever present floral flavour that compliments the dark chocolate beautifully. And of course, these cookies are best eaten with French vanilla ice cream.

73 thoughts on “Dark Chocolate Lavender Sables for a #BastilleDay #HolidayFoodParty”

Wolfed down Chinese takeout at 6pm. Now singing karaoke at home in my pjs with a dog in my lap. Tony’s classic picks are all BSB songs while I choose head bangers like Yesterday Once More and Tears in Heaven. Planning on heading to bed in half an hour. May you all be having as wild a time ringing in the New Year! #happynewyear #readyfor2020 #bringitbitch
I love seeing everyone’s Halloween posts but I’m so damn sad I’m not home to celebrate this year! C’est la vie. Instead, I got to spend this October 31st in my favorite city, doing and eating all the French-iest things! #cityoflights #jetaimeParis #vacationgorging
Number one on my priority list in Madrid was eating chocolate con churros at #ChocolateriaSanGines ✔️✔️✔️ #madrid #spain #vacationgorging #chocoholic